Mr. Hakim lives in Jordan and received cardiac ablation to treat a degenerative heart condition at Asklepios St. Georg in Hamburg. This was his second time receiving medical treatment in Germany and his first time working with Premier Healthcare.

I first tried the procedure in 2008 in Jordan and it wasn’t successful. In 2010 I learned about Asklepios St. Georg in Germany, because my doctor in Jordan had worked under Dr. Kuck in Germany. He told me, “If anyone’s going to sort this out for you, it’s probably going to be Dr. Kuck.” I decided to try it out. 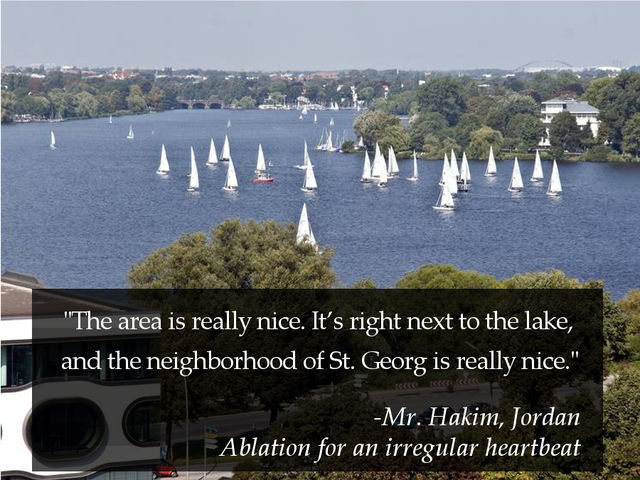 The surgery was successful, and for six years I was free of heart problems.

When I had complications again – because the sort of disease I have is reoccurring, not a one-time thing – I had to do it again, and I just wanted to do it where I already knew it worked.

I sent emails to the international department at Asklepios St. Georg and to Dr. Kuck’s secretary, who put me in contact with Premier Healthcare Germany. Emotionally, it’s nice to feel like there is somebody calling you, waiting for you at the hospital, filling out the paperwork, et cetera. But because I had done this before, the exact same place, almost the exact same surgery, it wasn’t so different this time.

The first time I went to Germany, I went as a regular patient on my own and didn’t face any issues. It was a smooth process. But maybe for someone who knows very little English or who hasn’t been to the West before or is less tech-savvy, it would be more efficient with Premier Healthcare. I think having someone that speaks your language and knows the system and has a little bit of a background on the medical procedure is helpful.

My experience with the German healthcare system so far has been amazing. The doctors and nurses are very caring with lots of attention to detail. They are very warm and very hospitable. The hospital is very comfortable. The area is really nice – especially this hospital. It’s right next to the lake, and the neighborhood of St. Georg is really nice. There are nearby hotels. So overall, I’m very happy with it.

Interview has been edited for length and clarity.